Program Note
My Imaginary Country opens with cheers of the people for Salvador Allende, but the coup d′etat they support eventually shatters the dreams they had of changes for the better. In October 2019, Chile exploded again. As in The Battle of Chile (1975, 1976, 1979), Guzman′s camera records the transformation of society, and asks not only lwhether a second revolution is possible, or but also how the spirit of the country that has been heading toward capitalism has awakened. He clearly perceives the potential for a completely different generation. They have no partisan leaders but resist as one body toward a common dream without the domination of a particular ideology. And Guzman, who knows that women′s voices are at the center of the new revolution, only interviews women. Just as he hold out hope for meaningful changes in the social system, Guzman also clearly hopes to avoid a return to the situation depicted in The Battle of Chile (1975, 1976, 1979). This film, then, stands as a kind of earnest prayer made by an old master. (LEE Yong Cheol)
Schedule
Director Patricio GUZMÁN
Born in 1942 in Santiago, Chile, Patricio Guzmán is a documentary director from Chile. The Battle of Chile (1972–1979), a trilogy about Salvador Allende′s reign and downfall, was selected as one of the ten best political films in the world by the film magazine Cineaste. He was invited to the Cannes Film Festival′s special screening for Nostalgia for the Lights (2010), won the Silver Bear for Best Script at the Berlinale for The Pearl Button (2015). The Cordillera of Dreams (2019) won Golden Eye Documentary Award at Cannes.
Greetings from the Director
Photo 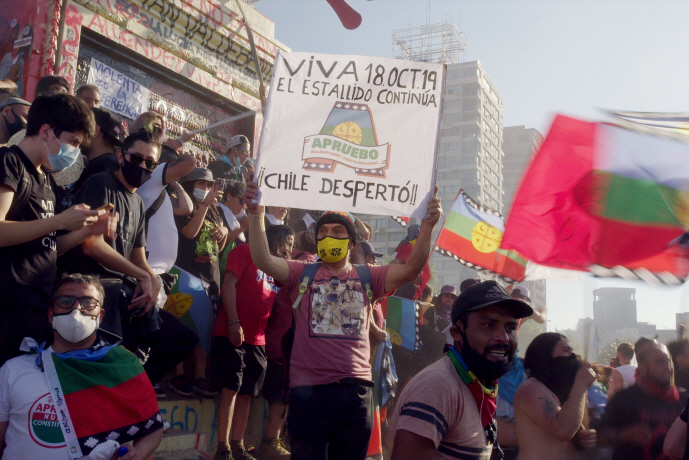