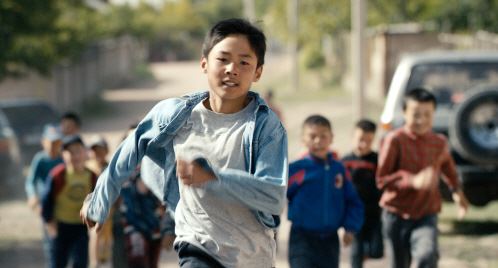 Running to the Sky

Jekshen is a young boy who lives in a mountain village in Kyrgyzstan. He takes care of house chores instead of his father, who has been drowning himself in alcohol since the divorce. Life is difficult for Jekshen, as he may be held back a grade for not paying the school repair fee, and his gym teacher warns him not to participate in class without gym uniform. The only thing Jekshen can do is to run. An exceptional runner, Jekshen does very well in a race, where he ran as the school’s representative. But his father is still incorrigible; the teacher he is in love with is dating someone; and he still can’t live with his mother.

Running to the Sky depicts the everyday life of a boy who leads a hard life in a small rural village. Maintaining an objective gaze, the film quietly and calmly follows the days of a boy who is a fast runner but also has nothing else he can do but run. The lullaby that plays in the final scene offers a small consolation to Jekshen’s life and to the audience who become invested in his life as observers. (PARK Sun Young)

In 2004 Mirlan ABDYKALYKOV graduated from Kyrgyz National State University, Journalism faculty. Prior to this, between 1990 and 2001, he played lead role in three films directed by Aktan ABDYKALYKOV (Swing, The Adopted Son and The Chimp). 2010-2017 he worked as First assistant director at The Light Thief and Centaur by Aktan Arym KUBAT. In 2010 debuted as film director with short fiction film Pencil Against Ants and in 2015 he made his first feature Heavenly Nomadic.