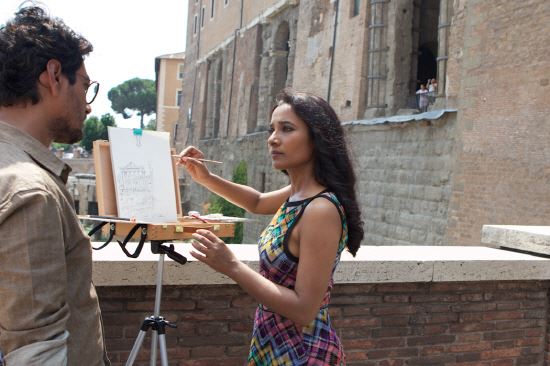 Raj is a 38-year-old man from a middle-class Indian family who will be married to his beloved fiancée in three weeks. He lives with his parents and his younger sister Reena in their family home. Then one day, he finds out that Reena lied to him and their parents and left for Rome. Determined to bring her back before their strict and patriarchal father finds out what happened, Raj also heads to Rome in spite of his fiancée’s attempts to dissuade him, the pressure to return before his wedding, and disruptions it causes at his work. But when he gets to Rome, he learns that Reena has gone missing. With the help of the Italian police, he searches for Reena and along the way learns things about her that he’d never known before. And Raj finds himself attracted to a woman resembling Reena he keeps on running into during his search for his little sister.

Roam Rome Mein is a debut feature penned and directed by Tannishtha CHATTERJEE, who starred in Dekh Indian Circus, winner of New Currents Audience Award at the 2011 Busan Film Festival, and Monsoon Shootout, screened at the 2013 Cannes Film Festival. Starring as Reena, CHATTERJEE perfectly performed the role of a producer, director, and actor for Roam Rome Mein. The film focuses Reena who goes to Rome to find her freedom, but it is also a story about Raj, who has always lived the part of a firstborn under a strict patriarch, and his journey of awakening as he things about Reena’s life as well as his own. (PARK Sun Young)

Tannishtha CHATTERJEE is a leading art house actress from India. She graduated from National school of drama, New Delhi. She has played the principle character in many significant women centric films. Her filmography includes Chigasaki Story (2014), Return (2016). She was given a special award by the London Asian film festival for her contribution to Asian cinema. Roam Rome Mein is her directorial debut.It is written and directed by her.