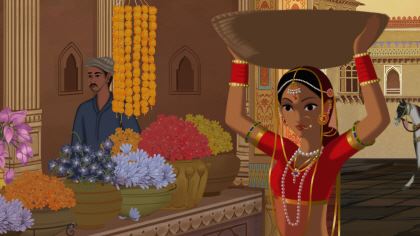 Bombay Rose is an animation about the flower girl Kamala and her clever sister Tara. The two girls live with their grandfather who repairs clocks in a corner of the streets in Bombay. Upon learning that his alcoholic son with a gambling problem sold Kamala to a rich old man, the grandfather ran away to Bombay with Kamala and Tara. When the grandfather falls ill, Kamala sells flowers during the day and dances in a bar at night to make a living. Salim is a boy who escaped to Bombay after witnessing soldiers murdering his parents. While selling flowers on the streets of Bombay, he runs into Kamala and the two fall in love.

A debut film by Gitanjali RAO that was six years in the making, Bombay Rose captivates the audience from the very first scene with beautiful drawings and colors. The film fills the streets of Bombay, which has now been renamed to Mumbai, with the lives of people who live with the illusions of Bollywood films in their hearts, their love, friendships, and responsibility via beautiful and fantastic pictures and Bollywood-style music. And its fantastic ending gives the viewers hope that a happy Bollywood ending can follow a life of difficulties and hardships. (PARK Sun Young)

A self-taught animator and film maker, Gitanjali RAO emerged into the international stage with her animated short, Printed Rainbow which premiered in Cannes Critic’s week 2006. Her four independently produced animated shorts have been to over 150 International film festivals and received more than 30 awards. She is also an award winning actor on stage and in films. Bombay Rose, a labour of love made over six years, is her debut feature.